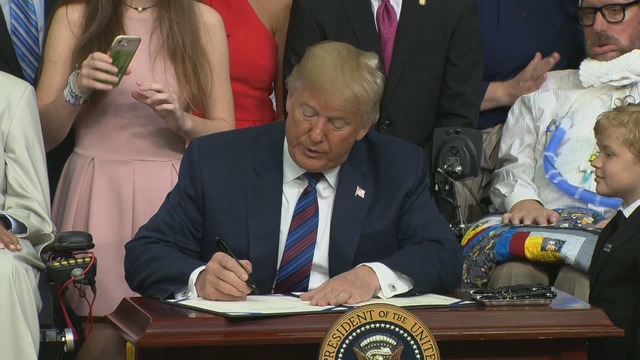 On May 30th, President Donald signed a bill that would mark a progressive change in healthcare policy. The “right to try” bill will allow patients that have been diagnosed with a terminal illness to seek treatment by experimental procedures that have yet to be approved by the Food and Drug Administration.

The highly-debated bill has already passed Congress and cleared the president’s desk without hesitation, an unsuprising event given that the bill has been a healthcare talking point for both the President and Vice President all year.

Those in favor view the bill as a significant victory for the Trump administration with those who are terminally ill having the opportunity to try alternative treatments that weren’t previously available. While others like the American Cancer Society argue that it gives “false hope” to patients and point out that the FDA has a program in place that allows patients to apply for access to experimental treatments or drugs and approves almost all the requests. Additionally, they contended that similar legislation has already passed in 38 states.

Previously, new drug treatments were required to pass the FDA’s three-phase clinical trial. The first phase would demonstrate the drug was safe for human consumption and will not poison the patient. In this phase, the treatment is tested on as little as 30 patients.

Then, there is phase two. It is at this point in the trails that most experimental drugs tend to fail. Phase two is the ability to prove that the drug is effective at curing the condition without devastating side effects.

What the “right to try” bill will allow is for terminally ill patients to have access to drug treatments that have yet to pass phase two of the trials, meaning the drugs given to the patient may come with severe side effects, prove to have no effect in curing their ailments, or both. Though in some cases, like patients with ALS, the potential for effective treatments may be more available.

Though to whom these treatments might be available to presents an issue for most because despite the catchy title, the “right to try” bill doesn’t open that many doors regarding human rights. It can be perceived that since the bill doesn’t require drug companies to grant access to those who request it, companies could turn down a request if patients don’t have the money to purchase the drugs. And given that supplies are limited, and since most insurance companies are unlikely to provide coverage for experimental treatment, the bill only provides treatment access for those who are willing to pay top dollar. Also, it is foreseen that until the protection for companies providing experimental drugs has been tested in court, many will hold will off out of fear of legal repercussions.

As a whole, although the “right to try” bill allows patients to try treatments previously unavailable to them and opens up avenues for further reform in healthcare, the immediate benefits from its approval will be difficult to come by. Whether difficulties arise due to high costs or companies unwellness to release their drugs that are still awaiting trial, more will need to be done to truly bring progress to an industry in desperate need of reform.